How To Open A Coconut?

Basically, there are many ways to open a coconut. How it is opened, usually depends on the reason “why”. Inside the coconut, there are basically (4) useable parts – and this will determine why and how you want to open the coconut. 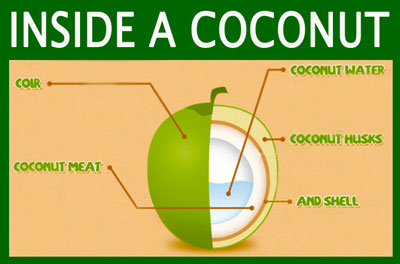 The outside of the coconut calls the coir, then the husk, shell, coconut meat and water. And depending on what part of the coconut you are going for, that will determine the method used.

Fresh coconut meat makes a delicious and satisfying snack which is at the same time healthful. I think that one of the main reasons more people don’t buy fresh coconuts at the market is that the task of opening a coconut may seem a little daunting.

In fact, many of the suggestions which I have seen are so much trouble and make such a mess that it hardly seems worth the effort.

TO START: Using a very simple method you can open a coconut in under 60 seconds

To open a fresh coconut with very little effort. I should qualify the word “fresh” when describing coconuts since you may have the same experience which I have had and find that the coconut which you open is fresh only in the sense that it has not been processed and not necessarily that it is fit to eat. Often the coconuts from the market are rancid when I open them. You can be assured that the coconuts shipped from here at www.cookycoconuts.com are always fresh.

Get FREE 2 Day Shipping and Other Discounts From Amazonzon.com

The first thing you have to do is remove the outer coir and husk from the coconut.

It does not matter is the coconut is green or brown, the process is just as difficult. Depending on your tools, removing the husk from the coconut is always the hardest part of opening a coconut. But it is definitely worth the time in order to win the juicy succulent coconut meat and water.

First, get your self a hammer with a claw at the end. The claw is the part of the hammer that pulls out the nails. You somehow have to secure the coconut either by holding it against something very sturdy.

I always recommend the floor or chopping block table. Next, you have to find a way to secure it so it doesn’t roll away. (The best method I found was an old pillow or garden soil). but for heaven’s sake, do not try to strike the coconut on a bed or anything that has a bounce-back.

Set the pillow on the counter (or floor), place the coconut on it’s the side, and give it a good wack with the claw side of the hammer. Make sure you hit the coconut right in the very center.

This might take a few good wacks to go deep. Once the craw is deep inside the coconut, hold it securely and pull back on the hammer in order to rip off (or out) a portion of the husk. The first hit and pull is always the most difficult. Just repeat this until all the husk is removed. Move to step 2.

Step 2. ( How To Drain The Coconut Water From The Nut )

In order to drain the liquid from the coconut (coconut water) you obviously need to make a hole in the nut. The easiest way that I have found to do this is with a pair of scissors.

Using one blade of the scissors (see the photo below) probe the three “eyes” on the end of the coconut until you locate the soft one.

If it has a sweet fresh coconut taste, proceed to Step 2. (Drink the coconut water or refrigerate it for later use.) If it smells or tastes sour or moldy, there is no point in proceeding; return it to the market for another nut or a refund.

Then use the scissor blade to ream a hole in this eye. You should easily be able to make a large enough hole to drain the coconut. Drain the coconut water into a glass. If it has a sweet coconut smell, take a sip of it to check the taste.

Step 3. (Learn How to Break Open The Coconut. )

After draining the coconut put it inside one of the plastic bags which are now used by practically all supermarkets. Then wrap a bag around the nut. Place the wrapped nut inside another plastic grocery bag (I normally double bag the nut for added strength.) 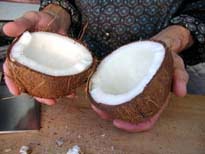 Holding the handles, swing the bag down onto a concrete step, sidewalk, garage floor, etc. You can also throw the bag down which gives you a little more control over the impact.

The impact will open the coconut shell into several pieces. Throw the nut down several times until the nut is broken into pieces of manageable size.

The impact will not only break the shell but will cause much of the coconut meat to separate from it. Open the bag and remove the coconut pieces.

Coconut meat which is still attached to the shell can be separated by inserting the blade of a sturdy knife between the meat and the shell and then giving it a twist.

The meat will normally pop away from the shell. Rinse the coconut meat to wash off any bits of shell and store in the refrigerator. Some people peel off the thin brown layer but I normally eat that along with the meat.

If you are going to grate the coconut for use in a recipe I would suggest peeling off the brown so that the coconut is snow white.

The last step can either be very easy, or very difficult, depending on what your goal is, and what you expect to do with the coconut meat.

We find three distinct methods, and only really recommend two of them. They include raw muscle using a specialty tool, the freezer method, and the oven method. 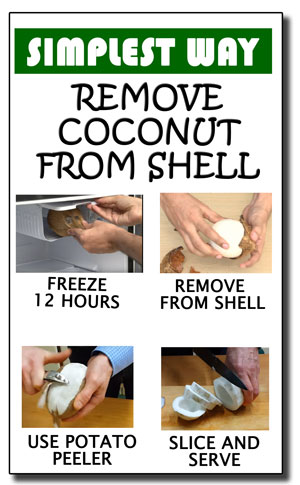 Let us start by disposing of the most difficult method first. This process requires having, or purchasing, a special tool. The tool is specifically designed to remove the raw coconut from the shell.

Start by splitting the coconut is two equal halves with a hammer, or the back or a butcher knife. Then insert the tool between the shell and the meat and start driving and twisting.

Eventually, you will literally pry the hard raw coconut from the wall of the shell. Remove any undesirable out skin from the coconut, and slice and dice to your choosing. But, keep in mind the there is an easier way.

The second method is easier, safer, and quicker. It uses heat to separate the coconut from the shell – so the processing is less labor. So, let’s get right to it.

First, drain the water from the coconut seed. Do not split, or beak the coconut outer shell. Preheat the oven to 300°.

Place the coconut in the oven for about 15 minutes. Remove the coconut and let cool for 5 minutes. Next, turn the coconut on its side (on a solid surface) and tap gently with a hammer, or the back of a butcher knife.

The coconut should easily break into two pieces. It should look like a large brown egg shape. If there is any brown skin on the outside of the coconut, simply use a potato skinner to remove. Lastly, get a nice long sharp knife and start cutting!!!

Totally opposite from the oven, we now move to the freezer. Go ahead and drain all of the water from the coconut.

Place the coconut seed in a cold freezer for at least 12 hours (It can be longer but not shorter). Next, split the coconut into two pieces with a hammer or the backside of a butcher knife.

Watch This Video On how To Open A Coconut Below.

In this video you will learn how to:


Buy a Coconuts From Our Coconut Store