How To Plant and Grow A Coconut from a Seed

Here are four easy steps to grow a coconut.

A step by set guide to plant a coconut from a seed.

To start a coconut from a seed, it is best to have the outer fibrous husk intact. it can be green, yellow, orange. Try not to use a brown coconut because that would mean it is old, and possibly no good.

Next, get about a 3-gallon pot and fill it full of soil. It is best to use high-quality nursery soil mixed with 40% coarse sand and nutrients. Add drainage rocks to the bottom of the pot to let it breath.

You can leave the pot in the sun or the shade. Water lightly to keep the soil very lightly moist. Partial shade will most likely help the coconut sprout more successfully.

Be patient because It can take up to (9) nine months for the coconut to sprout it’s first roots. It is common for coconut seed to take many months to sprout. But Make sure that you don’t over, and again, don’t ever move the seed and be patient. .

Your coconut will first split the bottom of the husk and shoot the roots downward. It may take several months before your coconut starts to even split. The coconut seed will be growing from the inside and thereafter, spout out the top and show it’s starter leaves.

After your coconut spouts from the top, let the coconut fully develop for about 3-6 months. After (6) months, you can safely replant the the coconut plant into a larger pot or directly into your garden.

Make sure to always use good quality fertilizer, moisture controller soil and organic manure. It is most important to remember they are used to growing in a sandy environment so keep the soil light and fluffy..

If you plan to grow coconuts, better have patience, seven years of patience before you can expect to see any coconuts. The coconut palm, Cocos nucifera, is considered a “three-generation tree,” supporting a farmer, his children, and his grandchildren. Some trees, which can grow to a height of 60 to 100 feet, even survive all three generations. Cocos nucifera, Nucifera meaning nut-bearing, has only one species that includes both the tall and the dwarf coconut tree, but many varieties exist within the species.

Though the coconut is commonly considered a nut, botanically it is classified as a drupe and is the largest of all fruit seeds. The coconut consists of the thin, strong outer layer of skin called the epicarp, the thick fibrous layer called mesocarp, and the dark brown hard shell called the endocarp that encases the coconut flesh. Just beneath the endocarp is the testa, the thin deep brown layer that clings to the white coconut meat.

Get FREE 2 Day Shipping and Other Discounts From Amazon.com 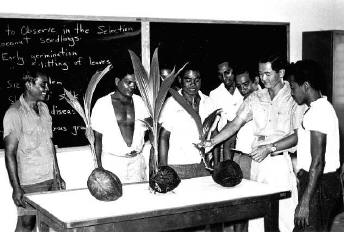 The coconut palm is a striking tree with a tall slender trunk that keeps its same diameter from the base to the top. Beautiful, lacy fronds, about 25 to 35 of them, form an umbrella-like structure at the tree’s zenith. The tree grows taller by forming new fronds that sprout from the top of the tree as the lower fronds die off.

Coconuts grow from the center of the fronds, close to the trunk. Unique to the coconut palm, each tree blooms thirteen times a year and produces all stages of growth at the same time, from tiny new green nuts to fully ripened brown nuts that are ready to fall from the tree.

Coconuts are persnickety about where they live. They cannot survive cold climates and do poorly in temperate zones. Coconuts require the hot, humid weather of the tropical regions that stretch 25 degrees north to 25 degrees south of the equator all around the globe. There the sun shines steadily with plenty of rainfall to nurture the slow-growing coconut palm.

To begin the growing process, purchase a coconut with its husk completely intact. Just like sprouting any seeds and legumes, the coconut must be soaked in water, only longer, two or three days.

Next, prepare a pot that is large enough and deep enough for the coconut by putting big pieces of gravel or stones in the bottom to allow for good drainage. Add about two inches of sandy soil, then set the coconut on the soil with the pointed or bud end up. Add more soil until it covers about half the coconut. Then set the pot in a warm place such as a sunny window, near a warm oven, or on a radiator.

The next step requires patience and diligence. Pour warm water over the coconut husk every day, making sure it does not dry out. The sprouting process is very slow, sometimes taking six months or longer. Until the sprout appears, the coconut is receiving its nourishment from the white meat inside. The coconut water within provides the nut with all of its moisture requirements.

For a sprout to appear it must first pierce through one of the soft spots, often called eyes, of the coconut’s hard inner shell and finally emerge from the large fibrous outer shell. When white roots begin to grow out, in about a year, the coconut can be planted in a large tub. 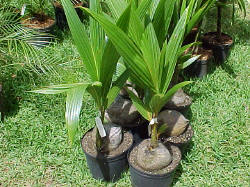 Coconuts planted at home are unlikely to thrive or produce a coconut. Today the nuts are a highly cultivated crop, where once they were a source of survival for natives of the tropics, providing the family’s support with only a few trees.

Since commercially planted coconut palms are grown for maximum yield, some farmers use commercial fertilizer while others use a different method. With intercropping, an effective method of fertilization and land use, the farmer plants banana trees or other large crops among the coconut trees. After producing its crop, the banana trees are left to disintegrate, producing ideal compost to fertilize the soil.

Coconuts come in many varieties. Some are grown for their higher oil content, while others are favored for their higher sugar content. Many growers prefer dwarf varieties. Though they lack the dramatic appearance of the tall trees, they are far easier to harvest. The dwarfs, which have a shorter lifespan, about 40 to 60 years, are also less vulnerable to a yellowing disease that kills many of the tall trees.

In agriculture, nothing is without its challenges. With all its advantages, the dwarf coconut palm also faces destruction from rodents. The creatures climb up the tree trunks and form communities under the protection of the feathery fronds, often putting a considerable dent in a farmer’s crop. The farmers have tried to outwit the rats by putting metal bands around the tree trunks, but these have no effect on the rats that are already colonized in the trees.

(Purchase Coconuts They Will Grow If You Plant Them Properly)

How a farmer harvests the coconuts is a matter of choice. On average, trees produce about 60 mature coconuts a year, though some will produce two or three times as many. The easiest method of harvesting and one that assures fully ripened coconuts is to simply allow the ripe nuts to fall to the ground.

Alternatively, the farmer employs nimble skilled men to literally climb up to the top of the tree with a machete and cut the ripe nuts down. Still another method, one that requires considerable skill, is to attach a machete to a long bamboo pole and reach for the ripe nuts while standing on the ground. This last method often fails to provide accuracy and frequently brings down unripe nuts as well. In some countries, farmers have been able to train monkeys to gather the ripe coconuts.

Before the farmer sends his coconuts to market, he removes the thick, fibrous outer husks, making the coconuts easier for the consumer to open. The exception is young coconuts, which reach the market with their outer husk partly cut away. To remove the husk, the farmer pounds the coconut against a spiked wooden post that is firmly secured in the ground.